Ohhhh snap!  It’s Tuesday and you know what that means (esp. if you’re still in college or still broke at the age of 35)…TACO TUESDAY!  You may have had the Americanized version of hard taco shells loaded to cracking point with greasy ground beef, sour cream, limp lettuce, and spoonfulls of gooey cheese.  For those lucky enough to live and eat auténtico, you got 3 soft shell tacos at a dollar each possibly of the following: arroz con frijoles (rice and beans), tinga de pollo (chicken in chipotle sauce), and/or carnitas (shredded pork).

Yet as appetizing as they all sound (caloric Cheez Whiz….mmmmm!), the shells often tore easy, the beans gummy, and the meats just a tad bit too gristly.  Of course this was all part of the experience!  To taco it up on a Tuesday was to take part in the sacred ritual of dining sin dinero!  But it’s summer…and you know your body doesn’t really need all that orange-tinged grease messin’ with those abs you’ve been working on.  SO!  As an alternative, and because Whole Foods happens to sell Porgies and Bluefish from Jersey on the cheap, I suggest making some budget-friendly Tacos de Pescado, or, Fish Tacos!

Unlike the fish tacos we’re used to that involve battered fish fillets (yes…this is not an authentic recipe), we’ll cut down the carbs further and fry a whole fish with minimal coating instead.  The usual fixins’, a squeeze of lime, and you’ll be wondering why you spent an entire dollar on tacos that strained your relationship with your dignity.

Obviously my cheap camera couldn’t fit all the epicness inside…

Feeds dos amigos at 3 tacos each

Equipment:
A wok or deep pan

Ingredients:
Enough oil to deep fry your fish in
1 whole porgy or bluefish (for those in the Motherland, try milkfish, tilapia, or any other white fish)
a pack of soft tortilla shells
1/2 a red onion, minced
1 large tomato, diced
4 – 5 radishes, sliced
1 – 2 jalapenos, sliced
1 avocado, sliced
1 cup queso fresco, crumbled (optional)…you can use that shredded cheese from Kraft if that’s your deal
2 limes, sliced into wedges (extra if you need some for that Corona you’re holding)
Lettuce, roughly chopped (optional…I find that adding lettuce masks all that goodness…but your call!)
1 tbsp. flour, to dust the fish with
Your favorite hot sauce
Salt & Pepper

Steps:
1) Heat your oil.  It’ll take a while so as you wait, chop up all your toppings as noted above.

2) Pat your fish dry on both sides and season with a bit of salt and pepper including the inside.  Go a bit extra on the pepper to remove that fishy smell.  Finish by dusting it with a light coating of flour for a bit of added crispiness. 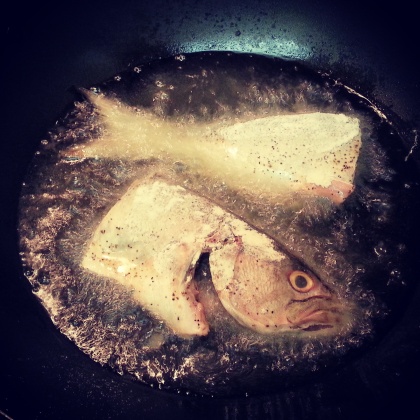 3) Once your oil is hot (you can test by dropping a tiny bit of water on the surface.  If it sizzles and tries to burn your face off, you’re good to go!), slide your fish right in.  It should sound like mini sparklers or the faraway sound of a hundred happy children applauding you.

4) Sip on your beer and flip the fish after about 5 minutes.  Cook the other side for about the same time or until both sides are browned.  Once it’s done, slide it out onto a paper towel to mop up the extra grease.  If you have a cake rack, you can use that so the oil doesn’t soak the paper towel all the way through.

5) Wait a bit for the fish to cool.  While waiting, steam your shells by placing them in a plastic container, covering it with a damp paper towel, and microwaving for a minute or so.

6) Shred the fish onto the shells and top with the garnishes above (or more if you want!  I would have used parsley if I had some), squeeze some lime, douse in hot sauce.  Look to your fellow diner and say: “¡Buen provecho!”

Before being drenched with a boatload of salsa…