People were asking what it felt like to be back in Minnesota and kept referring to me as “Mr. New Yorker” (funny how the NY natives called me “the guy from Minnesota”).  I only spent 4 years in the frozen tundra of the Midwest but “overwhelming” would be the one word I’d use to describe my quick trip back for my kid bro’s graduation.  In the space of the year since I last visited, there have been enormous changes to the campus spots I used to frequent and I found myself lost in areas where new buildings had sprung.  The old watering holes were gone, replaced by gleaming apartment complexes only the rich, trust fund students could afford.  Light rail tracks cut through campus, signalling things to come.  And the familiar student spaces were torn down and in their stead stood airy, if not sterile, halls.  The food on campus too, had changed. 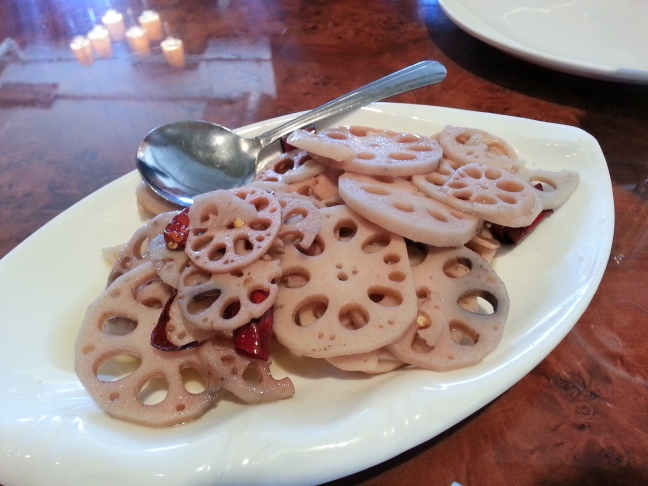 Across the street from Chipotle, in a spot once occupied by a decent Thai restaurant, was a Szechuan restaurant that proudly claimed to be voted as one of CNN’s top 50 Chinese restaurants in the US.  Well deserved I might add as Little Szechuan’s Spicy Rabbit (with bones) in Dry Pot was just as pungent, tingly, and sweaty-scalp-inducing as the ones I’ve stumbled upon in Flushing’s Chinese enclave.  Pair that with the crunchy and more subtle Fried Lotus Roots and I applauded campus for having some real fiery fare done right (though to be fair Little Szechuan already had 2 locations in MN prior to the opening of the campus edition).

A 5-minute Connector bus ride over to the West Bank of campus led us to a new Ethiopian restaurant situated at a spot that was supposedly “cursed” since so many restaurants came and went through that corner spot.  A plate of injeera, the traditional spongy, sour bread of Ethiopia, topped with a variety of stewed vegetables and dried meat was just as varied in its tastes from the creamy yellow lentils to the cooling beets and the hearty cabbage.  It was a dish eaten without utensils and shared with family.  With a side of beans and homemade cheese and a pretty extensive menu, I hope Dilla’s Restaurant fares better than its predecessors.

But as much as MN has changed, leaving me with a little longing and bittersweetness, some things didn’t change.  Old classrooms looked as if they hadn’t been touched since I left.  The McDonald’s still stood on the edge of Dinkytown.  And the people too…smiles were just as warm, greetings were just as genuine, and laughter was just as plentiful.  It was overwhelming walking through streets I had walked many a cold day to class and having a barrage of memories come rushing back.  The Hard Times Cafe that I passed almost everyday, a glaring juxtaposition to the more uppity business school, was as grungy as ever but finally seemed approachable.  After going through a massive feast of the heaviest brunch items (think biscuits and gravy, french toast, migas…all for 6 people, 4 of whom are light eaters), I was kicking myself for not having come sooner.

A third of what we ordered…

I flew back to the New York jungle with mixed feelings.  Glad to see old friends, excited to make new ones, and a little saddened by how fast things change no matter where you go.  New Yorkers often think the pace of the world is set by them (and I guess being Mr. New Yorker now makes me one of “them”)….but they don’t realize that everyone is else is sprinting just as fast…only towards a different destination.  I reflected on how the old and new can stand side-by-side on busy Washington Ave. as newly graduated students walked on by and I was reminded that even though we were all headed to different places, we were all going the same direction: Forward.