(Special thanks to Ayesha, Jerry, and the Topitzers for having us over and letting us be a part of a three-way birthday/reunion).

It’s weird being back on WordPress and writing again.  It’s like that one time you finally cooked that last can of Spam you had taken with you when you moved apartments.  It doesn’t evoke the subtle smell of nostalgia like a warm bowl of arroz caldo.  Nor does it give you that sinking feeling of guilt you get when you devour that full pint of dulce de leche ice cream.  It’s more like reuniting with a not-too-long-gone past.  Like that familiar salty goodness, it’s like being back in a place you’ve never quite left.

It’s been almost two months since I’ve taken a leave from this blog and I was surprised to have people asking whatever happened to the Errant Diner.  Well…I’m back now and I’d be remiss if I didn’t fill you guys in.  For the past month, my job has kept me in the office till long past midnight and the better part of both weekends.  I slept, ate, drank, and shitted Excel sheets.  While the young and hungry plowed through brunch after boozy brunch, my pots and pans lay untouched, dry on a stove that only turned on to heat the occasional cup of tea.  I lost 10 lbs., slept 4 hours a night (on a good night), and subsisted on Seamless sushi dinners.

But in the midst of it all…I became part of a ragtag catering crew.  A crew that would later fizzle out as fast as it had came rushing into my life  I’m hesitant to call ourselves a legitimate business and you may label us as you wish, but I suppose I should start at the beginning. 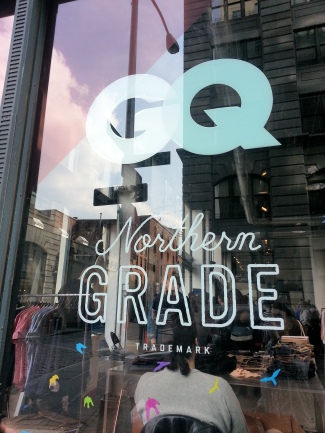 It was a Saturday and I had just finished checking out a menswear popup (didn’t buy anything), strolling around Brooklyn (didn’t meet anyone), and was now lounging around in some spacious coffeeshop (didn’t accomplish anything) when I got a call from my friend and mentor Ayesha.  It began quite innocently:

It slid into insanity:

A: “Great!  This guy who was supposed to come in to cook for us flaked out so wee’re looking for around 4 courses, Mediterranean-style.  Can you be ready to serve in 4ish hours?”
P: “Wait…what?  Ummm…I don’t even have a menu yet”

And it dropped straight into despair:

I forget how the conversation really went down but frantic calls to my friend Ricky, the other third of the group, were made and within an hour, I found myself in a quaint part of Jersey.  A black van pulled up and I have a hard time recollecting where we drove or what we spoke about.  Running through my head were menu tweaks, presentation ideas, prep work.

I awoke to find a red-stained chef’s knife in my hand and the lifeless carcasses of 3 tomatoes who had done nothing wrong.  Dinner service was in about an hour and looking down, I had only managed to stir together a vinaigrette.  Luckily, Ricky finally joined the fray and countless nights of us making budget tacos on Friday nights kicked in.  Sleeves rolled up elbows and zucchini slices rolled into pans.  Mussels were steamed in scalding water while vegetables were shocked in ice baths.

The call to dinner was sent with minutes to spare and like an improv ballet performance, fine china came out of cabinets for inspection under the watchful eye of the family matriarch, Pat.  Wines were quickly uncorked and with little fanfare, we sent out our first plate of food.  To keep it safe, the menu was a collection of some old dishes I had made.  Tried and true with a few tweaks here and there.

I spoke few words and Ricky spoke even fewer but somehow, food came out at a steady pace and at one point, seconds were requested.  I think it was in the midst of the second course, the subject of one of my earliest blog posts that I stopped to take it all in: 2 transplants, in the middle of Jersey, arms splattered in mussel juice, listening to soft classical music stream through the palatial dining room while the tunes of Lana del Rey and some obscure rapper reverberated in the kitchen.  It was all just a dream I kept telling myself.

Spicy Lamb Ragu over Gnocchi for the meat-lovers…

…a Rosemary Zucchini for the vegetarians.

Third course came by there was no stopping.  Positive reviews started to come in and while we weren’t getting much heat from the diners, the spicy lamb we were finishing definitely provided enough.  Our hosts, gracious as ever, popped in a few times to ask if we needed anything else despite them being the ones who were supposed to be relaxing.  We shook our heads, tempered the heat from the chilis with a little heavy cream and sent out our third course. 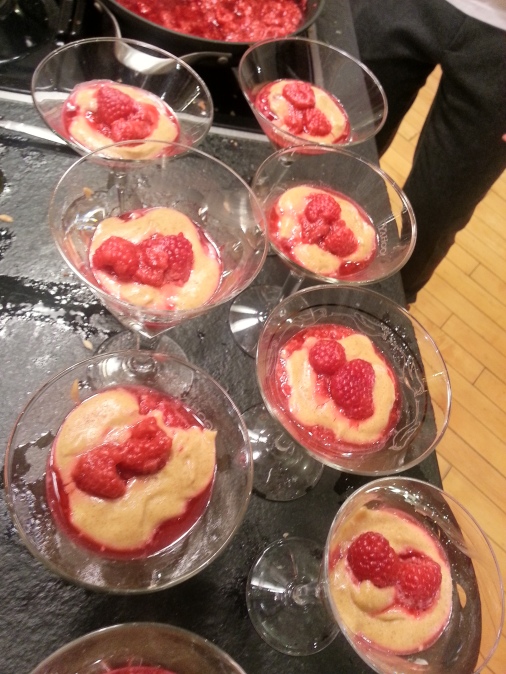 We glanced around at the havoc we wreaked around the kitchen, catching a few breaths before the final round: a previously untested dessert.  Egg yolks stained the previously immaculate countertop, the pullout chopping board covered in vegetable peels, and dirty dishes that were served at each course piled high behind us.  With a few minutes left, we quietly whipped egg yolks and sugar together.  We scooped the mixtures into martini glasses and set the finale down. 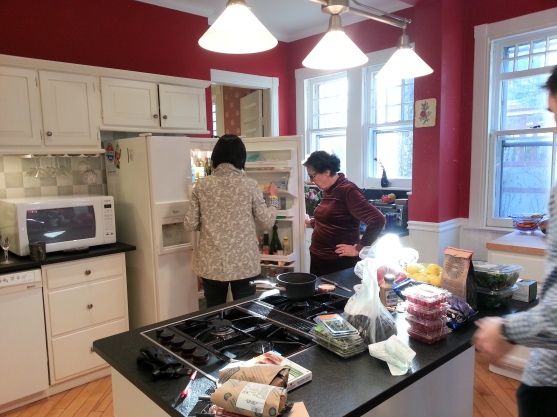 We retreated to the kitchen, scooping ourselves a bowl of the leftovers while the satisfied guests cleaned their glasses.  Ayesha and Pat came in with clean plates and bright smiles.  “The food was amazing”.  I sat there numbly as we got into nitty gritty feedback.  Hours ago I was sitting in a sunny park bridges over wondering when I’ll ever get back to cooking again.  Here we were, bone-tired, still covered in the remains of minced onions, with a pile of dishes lay waiting.  I vaguely remember scribbling notes down in my stained notebook as Ayesha talked.  But all I remember was this: “…tonight was just a simple get-together.  I have over 80 people attending my fundraiser soon.  You guys can cook…you just have to believe it”.

That train ride home was the shortest ride from Jersey I’ve ever taken.  The subway car was devoid of the usual quiet discomfort only a city that eats its young can provide.  Our bodies were exhausted but our minds were racing with the possibilities.  We stepped back out to the commotion of New York.

…..and so the Mystery Meat Group was born.