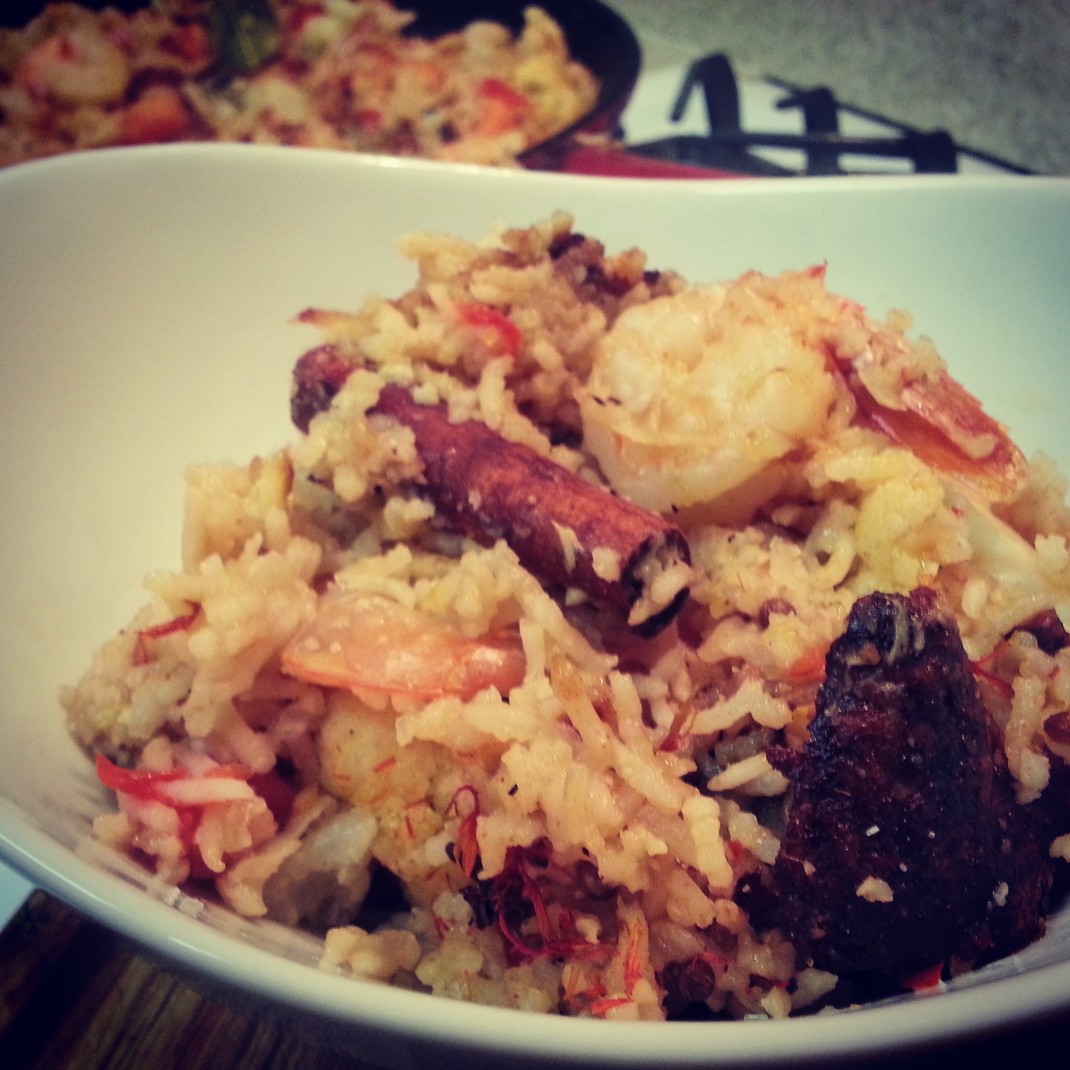 Going through my backlog of blogging inspiration and I stumbled across an older news piece from the India Times about a wedding that was called off due to a conflict over…get this…..an argument over biryani.  Biryani is a South Asian rice-based dish cooked with spices and hearty meats.  It has its roots in Persian cuisine and was something my family and I grew up eating in Saudi Arabia from the numerous Indian and Pakistani food stalls. So the story (full details here) goes that the groom’s family demanded mutton biryani despite the bride’s already having prepared a chicken version.  Arguments broke out and it escalated all the way to the village elders until finally, the wedding was called off.  Apparently the bride saw the argument as a bad sign of times to come.  For a couple that was on the cusp of declaring their undying love, it was weirdly amusing seeing it all break down over some rice and cooked chicken.  I mean…isn’t love supposed to conquer all?  If it can move mountains surely it can move a plate of food no?  The bride could have chosen to remake the dish or the groom give in and all this could have been prevented. Many a time I’ve argued with my roommates on the meaning of love (we’re gentlemen and scholars).  I contend that love is simply a choice one makes and not an emotion.  But who am I to judge them without knowing the full circumstances of their fowl (ha!) engagement.  So I thought….if neither side would concede to the other, why not make a third option available?  One that both can either agree to love or hate together.  Instead of chicken or mutton….why not shrimp? After all, shrimp biryani doesn’t require long marination time, is probably healthier and lighter, and cooks faster!  Yep…leave it to me to somehow tie food and some abstract idea together.  So as I contemplated the esoteric qualities of “love”, I pulled out my cast iron skillet and got to work…..

WITH A LITTLE BIT OF LOVE…. 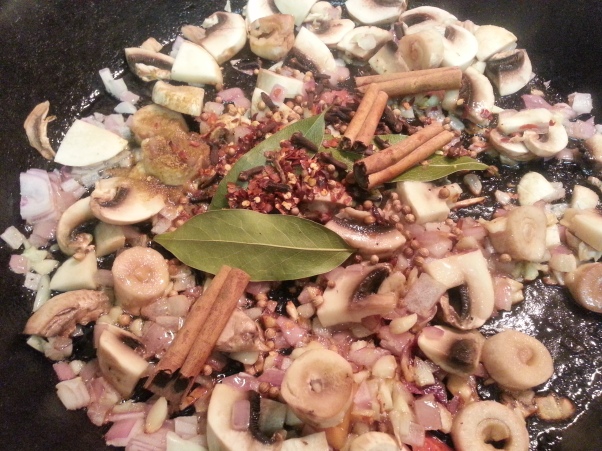 1) Heat some oil in a heavy pan on medium-high.  Saute your onions and spices and wait.  Wait till the aroma hits on you like you hit on that cute coworker of yours and not a moment sooner! 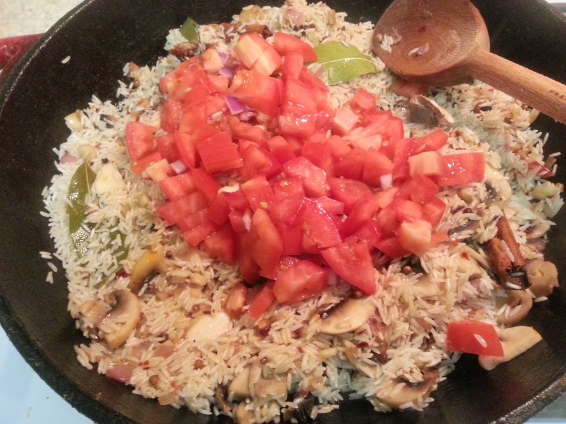 2) Add the mushrooms in and brown them.  Toss in your rice, making sure the oil coats it evenly and toast it for a minute or two.  Then, throw in your tomatoes. 3) Once the tomatoes start to soften, add the shrimps.  The shells from the shrimp will flavor your rice, giving it a lightness that you won’t get from a mutton version. 4) When the shrimp is about 90% cooked, slide the remaining vegetables in and give it one more good stir for 2 – 3 mins. 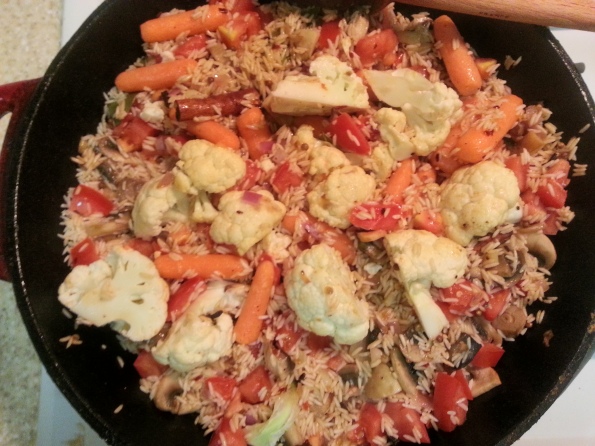 5) Pour in your stock, making sure you cover the rice by about a 1/2 in. / knuckle’s worth of liquid.  Don’t try to cover the vegetables as well.  You’re cooking rice, not making soup.  Heat on high until it starts to boil after which you reduce the heat to a medium simmer (medium-low).  Cover. 6) Wait about 15 mins. as the rice cooks before checking it.  The vegetables, if you didn’t cut them too large, should be soft with a bit of a crunch to it and the rice pretty much cooked.  Cook for another 5 mins. to dry it out a little and there you have it!  Biryani! 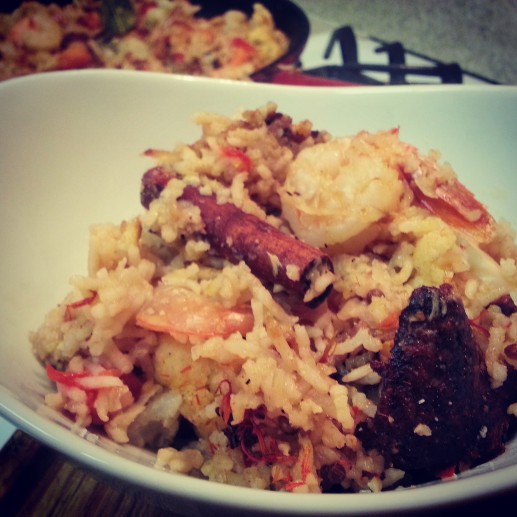 So what’s the point, I mused, between peeling shells of my umpteenth shrimp.  I mean, you can go on forcing yourself to stick to this one idea of love in your head much like this hapless couple did with their biryani.  Or, I pondered, chasing the spiced rice down with an imaginary mango lassi, one could choose to try something new.  Now of course one can’t live his/her entire life sampling every single biryani out there without finding a favorite…but I say unto you, don’t miss out on a great meal and be open to choosing something new.  You never know what you’ll find in the next plate of food you’ll have.