I’m not quite sure why I turned right instead of left to get lunch that Wednesday. I usually headed south on Park to the chain delis and restaurants closer to Grand Central.  For some reason I decided to get food that day from the “Mysttik Masaala”, the Indian food truck right outside our building on 54th and Park. I approached the solitary man working the line of suits in a cart that simply said “Indian Food” on top bordered by a litany of rotating menu items, many of which I have never heard of before despite growing up on vegetable kormas and mutton handis. 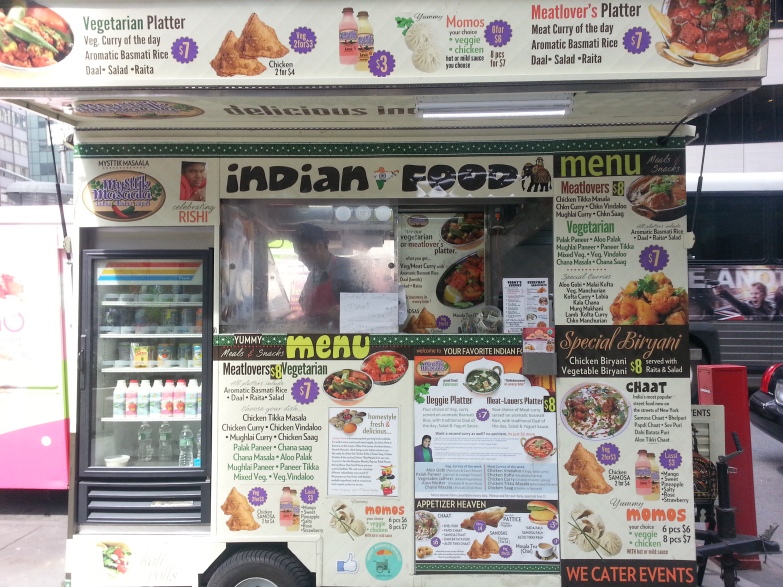 As I had gone vegetarian for a while, I ordered the Vegetable Curry which came with a side of Daal (cooked lentils) and Basmati rice from the friendly and talkative proprietor. I ordered it with “the works” and got the whole thing topped with onions, cilantro, chili sauce, and raita (yogurt-based sauce). Having subjected half my taste buds to death by chili over many years, I gave my usual request that he make my food spicy the way Indians knew spicy and not the milder level Americans found more palatable. With a glimmer in his eye, the man pulled out several shakers of mysterious spices and covered my curries in it. He chuckled and said, “We have a saying. With Indian food, the spicier it is, the more fun it gets…you’ll have fun with this one”.

And have fun I did. The heat was “multi-layered”, for lack of a better word. The tangy, slap-in-the-face of the chilli sauce came first, followed by the warmth of what tasted like cumin in the throat, ending with the deep-bellied heat of the nameless spices that the slices of okras and onions marinated in. For a good hour the windowless room I had been in for a good month fell away as the colorful plate of food yielded flavor after flavor. It was in no way an assault on the senses like the fiery Szechuan dishes I’ve had in Flushing but it was as if that jovial Indian man was sitting next to me, talking me through the flavors he so proudly sold me on. The creamy earthiness of the yellow lentils, the cooling yogurt that was a welcome break before re-entering the heat of the curry, the subtle aroma of the usually bland white rice we’ve all grown accustomed to.

I was hooked. Yuvaraaj, as he introduced himself later on, became my dealer, confidante, and therapist for the weeks following and as work got progressively harder, his curries also increased in heat. And at $7 a plate, that might have been the cheapest therapy session I’ve seen in NYC!  Every lunch, he handed over the container of food with a playful smile, as if he had snuck in something special just for me like the time he introduced me to Dahi Vada, fritters soaked in yogurt. 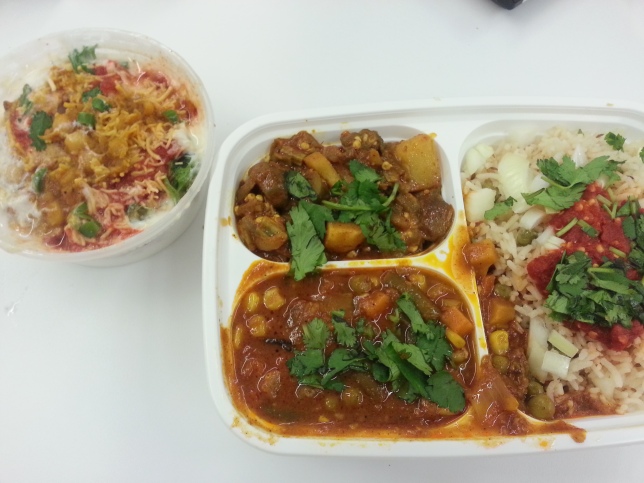 Okra, peas, and lentils. Side of Dahi Vada.

Since I was a regular at this point, he hooked it up by topping the Vada with chaat masala spices and sweet chutney.  As days went on, the solitary man on that busy corner shared himself as much as he did his food. He complained about his back, the struggles of owning a business, of his daughter who found him Groupon deals. He spoke of the long hours and having to work with others and I wondered how he managed to cook food that had me daydreaming, lost in the heady spices, day in and day out. 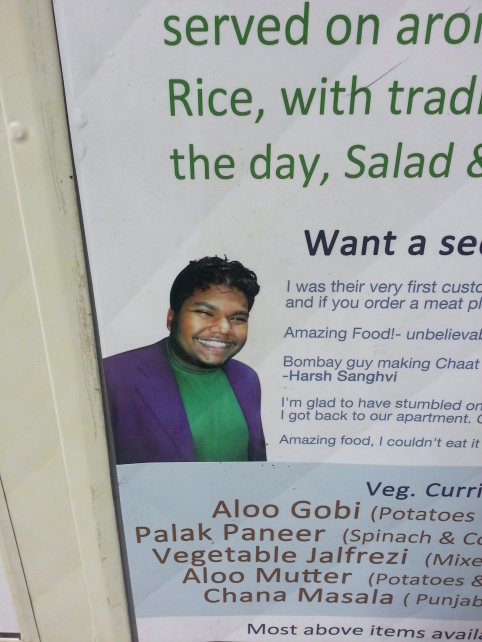 One of the last few days I was assigned to work at our building, I casually asked him about a picture of a smiling man set in the middle of his heavily-worded storefront. “Celebrating Rishi” was the scant caption. With a smile that resembled the young man in the picture’s, Yuvaraaj said, “Ah! That’s my son.  This place was his idea”. I asked him where he was as I handed him my money and he laughed, “He’s feeding far more people than I am now”. Thinking he must be a famous chef in India, I asked him if his son had his own store in New York or perhaps back home. He paused for a moment before saying quietly, “No. My son passed away”. All sound was sucked from that busy intersection as the weight of those words hit me and how meaningful his earlier statement of Rishi feeding more people now seemed. Why this cheerful man continued to dish out plate after plate of food that seemed like it was heaven-sent made sense now.

As I walked back to the office one last time, I turned back to wave and saw something I had missed throughout weeks of buying those lunches. What I had thought to be a small, unassuming cart, operated by a solitary man, was actually staffed by two. Right behind Yuvaraaj, when I squited and the lighting was just right, was another younger man wearing a sharp purple blazer and a green shirt. You might miss him at first but he’s right there and although he’s dressed differently from his more casual father, the smiles are the same.