I wonder what compels a person to speak up and say “Hi!” to a stranger.  What in a person’s personality allows (or at least in my rather shy self…forces) them to reach out and touch another person’s day?  Another one of those philosophical questions that hit me when the right mixture of cooking aromas and alcohol (in this case, it was organic Calamansi Mojitos) is present.

If it wasn’t for my new friend Bianca striking up a conversation with me in the otherwise conversation-free American Embassy in Manila, I don’t think I would’ve wound up in a cozy apartment in Sunnyside, Queens, attempting (and ultimately failing) to recreate Pansit Palabok, a Filipino dish of rice noodles doused in shrimp gravy, and something I haven’t made in a year. 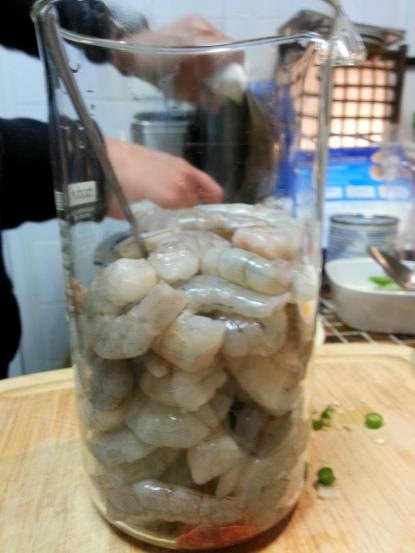 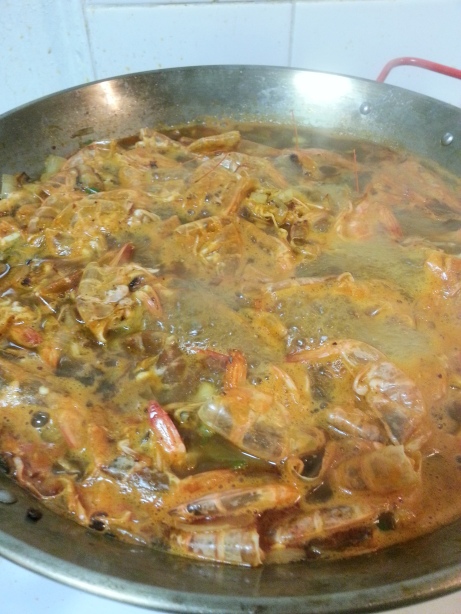 Coincidence led to coincidence and long-standing co-chef Ricky and I were making quick work of the shrimps in front of us, boiling them down into a stock, and cooking the noodles.

Merengue for the Brazo by Warren Bueno.

Behind us, a modified Brazo de Mercedes was being constructed.  The usually spongy, artery-blocking but ultimately soul-opening cake was being prepared to be frozen.  Modification and fusion were the theme of the night as each dish for this potluck running on Filipino-time was partly assembled, partly cooked in the tiny kitchen. 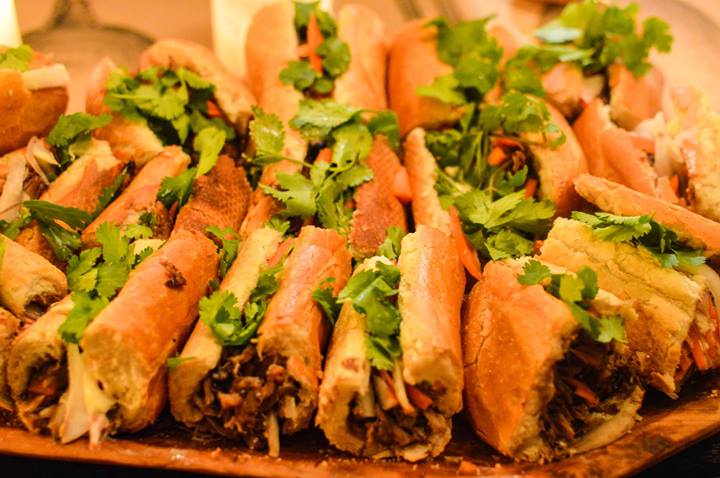 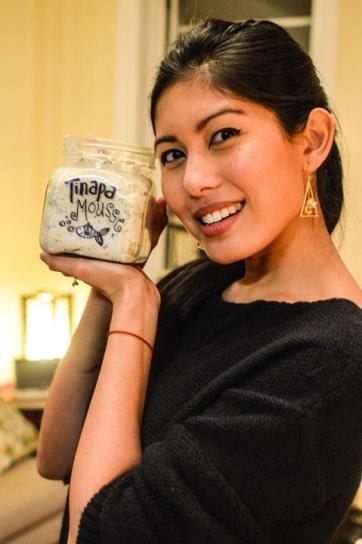 The potted fish spreads and Rillettes de Saumon one finds in those quaint French bistros was replaced with the Filipino Bangus, or milkfish, to make Tinapa Mousse.  Apparently there were 3 entire milkfish that fit into that small jar but with artwork and a smile like that, who was I to question? 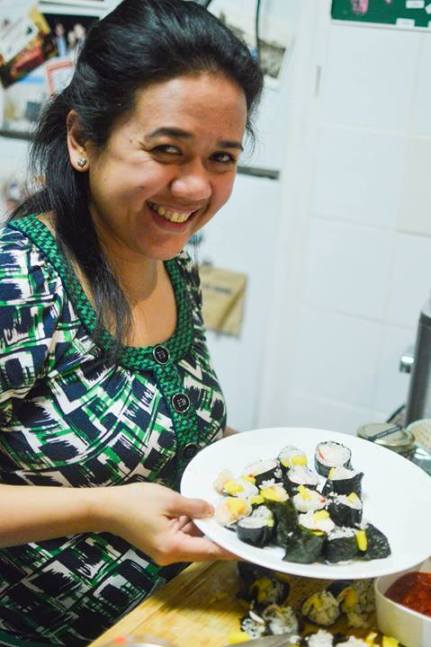 There was sushi next to Laing, or stewed taro leaves, next to more pork stew (yes…there was a lot of pork that night.  But as they say, a Filipino dinner without meat, is not Filipino).  The alcohol flowed fast, as if suddenly, the food gave everyone an allergy against drinking water.  Then again, it might have been the newly discovered Calamansi liqueur we used. 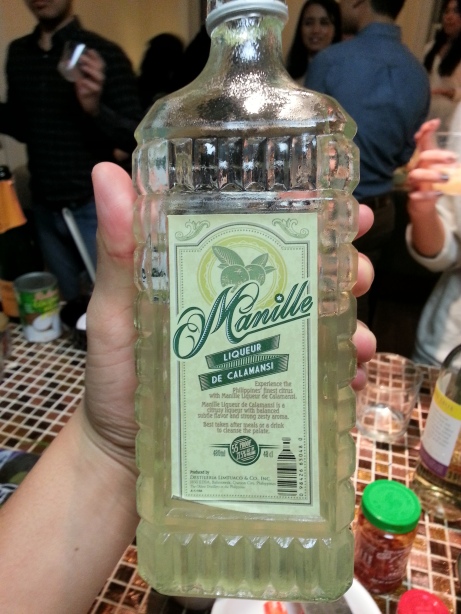 And while not fusion, there was a whole roasted pork belly or Liempo, complete with crispy skin and sides of Mang Tomas.  While unsaid, there was a definite movement of the dinner party towards the oven door as the time for the pork belly to come out neared.

The secret to a great roast: dry skin. 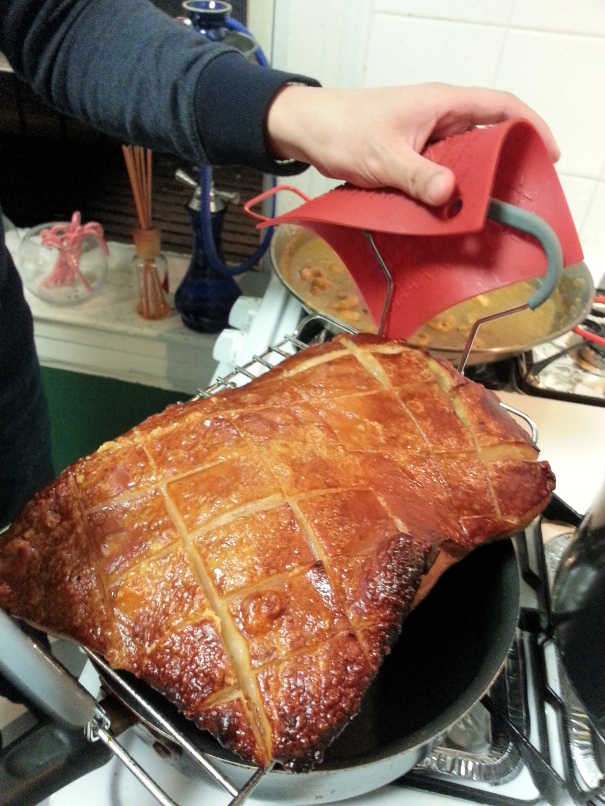 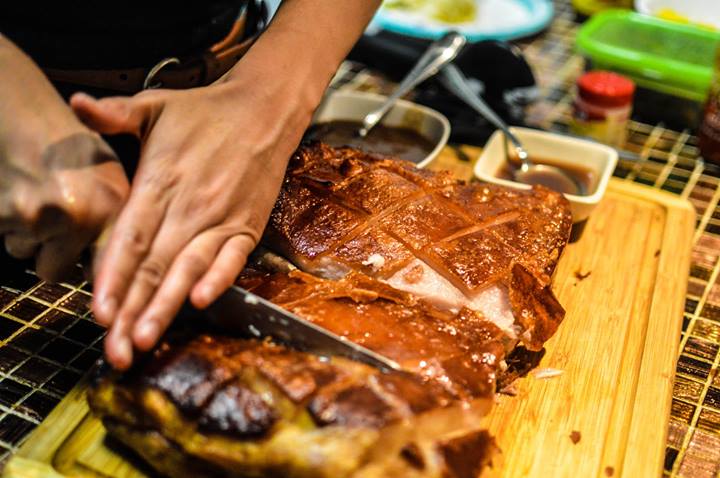 There were calls to go first and I had to shamefully use the fact that Anne’s (the pork belly magician) grandmother and I shared the same last name in an attempt to get first pick at the skin that was oozing fatty goodness.

The conversations turned stranger as the night went on, accented by hurriedly passed out cups of the frozen Brazo de Mercedes (which now resembled a pudding but tasted just as sinful as the original) and Keso, or cheese, ice cream.  As you can tell, we were in no position to take pictures of either the Brazo or ice cream (which at one point I liberally doused in Brooklyn-made whiskey and called it a float).

Mastermind on the left, Vanity Fair cover in front.

All the while William, the host, scurried around the room, playing gracious server, co-chef, food taster, official photographer, in-house DJ, and resident gossiper (what Filipino isn’t?), ensuring that this random collection of gourmands ate, drank, and laughed well.

The food was indeed new.  Filipino food that, while inherently fusion to begin with, was further experimented upon that night.  There was beautiful chaos…

Chaos being the operative word.

Yes….we re-arranged the letters to spell “Eat” later on. To those who know what that one says…leave it be. 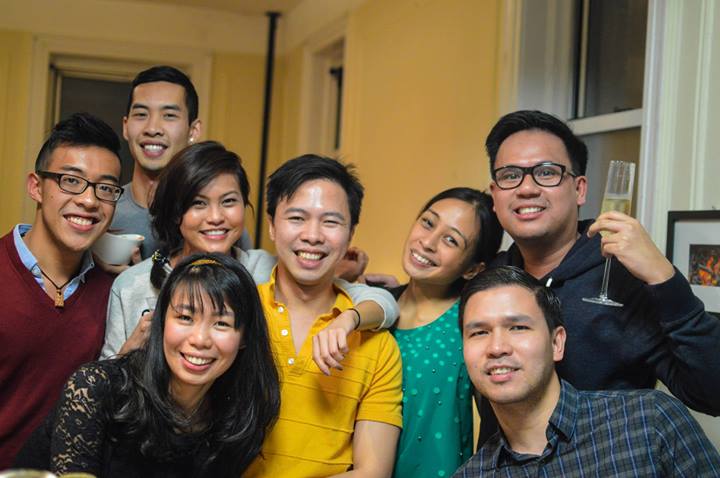 The same magical mix of pork skin and my umpteenth glass of mojito got me thinking again.  The thing is, people like to overcomplicate the trying of new foods.  Some unfairly liken it to bungee jumping or some similar fear-inducing activity in that there’s a moment of sheer terror and then it’s all over.  Next thing you know you’ve found some new foodie addiction and you’re out there bragging about it.  But really trying new foods is like meeting new people.  Much of the fear is illusory and the worst that can happen is that you don’t like what you ate.  It’s a far more mundane task than we make it though the benefits are surely real.  The next time I’m in some quiet area full of people trying their best to ignore the masses around them, maybe…just maybe, I’ll work up enough to courage to say “hi”.  Who knows who I’ll be sharing my next meal with…