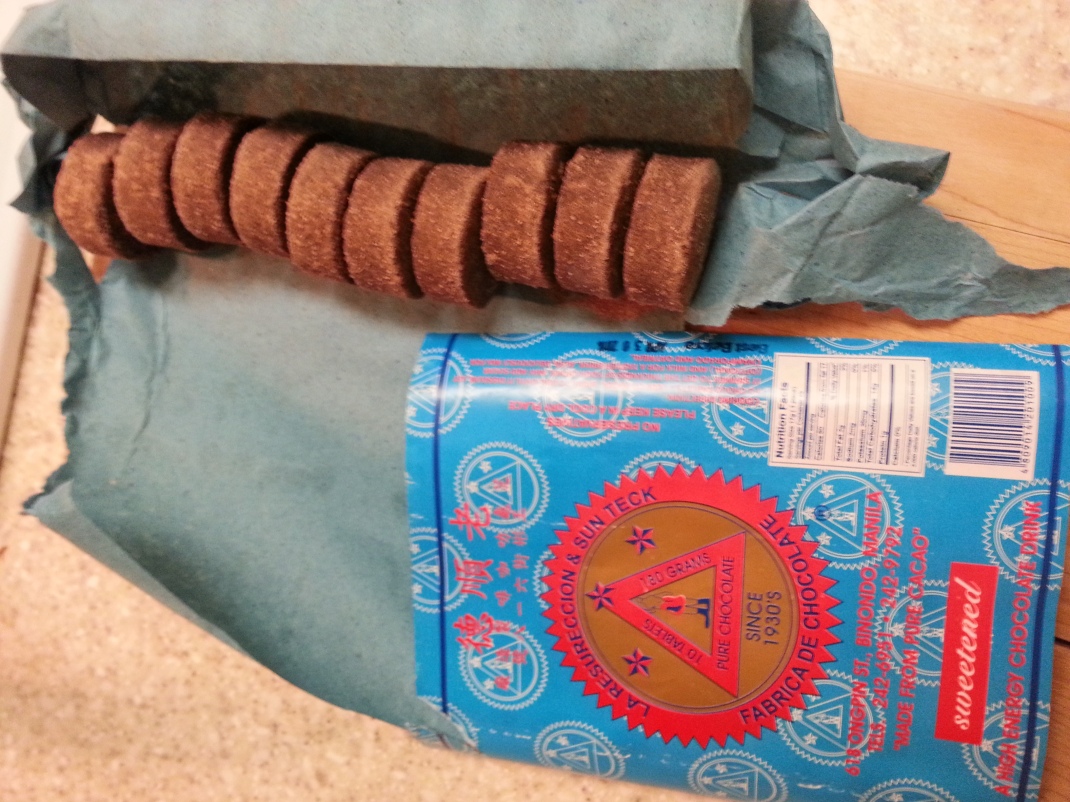 Taking a break from working on my Philippine trip backlog to warm up to some winter weather comfort drinks. Yes…those who know me that whiskey of all persuasions comforts me whether it’s a beautiful, balmy summer day by a Minnesotan lake or the Apocalypse is descending upon us. But this weekend, I decided to give hot chocolate another try. You see, I’m not a big fan of the more popular Milo (in the Philippines), Nesquik (in the US), and/or Ovaltine (y’all remember this one fellow Saudi friends!?) drinks that my family loved on Friday mornings. They were too sweet, coating my throat with this sludgy film that no amount of water could wash down.

Except this time was different. I had spent an hour in Binondo, hunting for La Resureccion Tablea, the famed chocolate factory. A tablea is the Filipino chocolate disk. Dark, powdery, and melted down to create the thick Filipino-style hot chocolate, or tsokolate (pronounced “cho-koh-lah-tey”…I have no idea why we insist on changing the spelling of these things.  It’s bad enough that my grade school books spelled “cake” as “keyk“), once popular but now replaced by the instant (though sometimes not always inferior) variety. The store itself looked like a rundown but clean electronics shop with only a few display cases half filled with the two varieties of tableas: unsweetened and sweetened. With a name that felt like it belonged on a Church and a logo that was borderline Masonic, the chocolate must’ve been that good.  The old-school wrappers the store used made the tube of disks look like an oversized Haw Flakes package or a weird fire cracker. 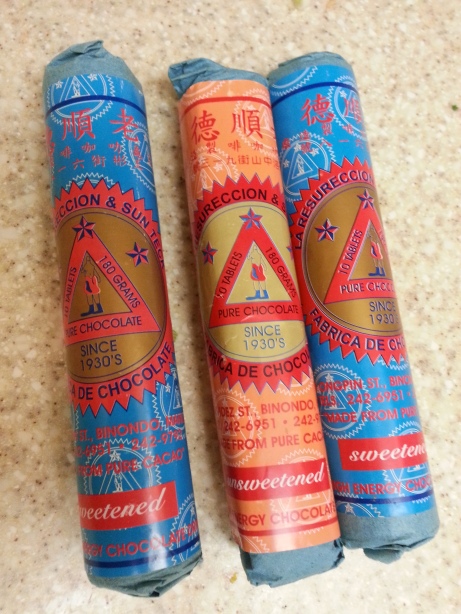 These are Haw Flakes…props to you if you know what these are.

It took nearly a month of waiting and moving from suitcase to suitcase before I finally opened a pack here in New York to try with the roomies during a lazy Saturday night spent playing Call of Duty.

I just wanted to make 3 1/2 cups for us to try so I split open the sweetened pack:

AND HERE WE GO:

1) …and melted 6 disks in water I had been boiling previously.

2) After about 8 minutes and the disks had dissolved with some stirring, I reduced the heat and added about 1/2 c. of skim milk. I’m told one can use any milk or even drizzle some evaporated milk at the end.  Other recipes called for sugar but I tasted it and it was already pretty sweet.  Instead… 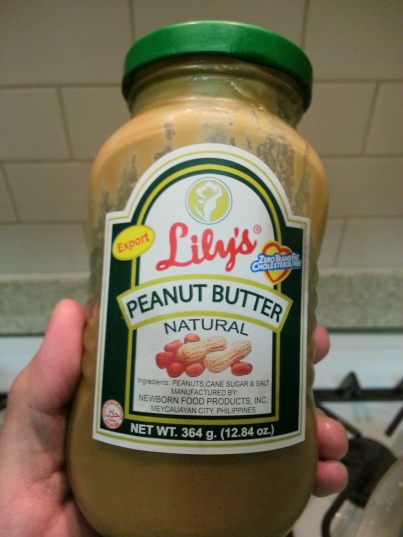 So good you can feel the crunch of the sugar crystals.

3) …I added a tablespoon of Lily’s Peanut Butter. Hell, if I’m going to make a Pinoy hot chocolate, I might as well make sure all the ingredients are 3-Stars-and-Sun approved! Kept stirring a bit to dissolve the peanut butter too.

4) I then transferred the whole pot into a high-walled pitcher (previously filled with vodka-spiked cream soda, courtesy of last year’s Made in America Festival). Now came the fun part.

Interesting looking tool they have here…

5)…I lowered a wooden batidor (or whisk/beater) into the mixture and whisked it between both hands as if I was buildling a fire. One can also use a mixer or immersion blender but ask yourself: “Did my lola have one in her days?”. If yes, then you must’ve been born into the elite class in which case your beloved yaya (house maid) can do this step for you (I jest). 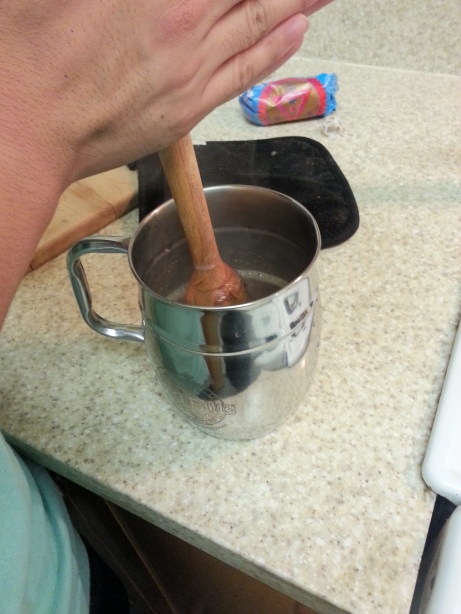 Now, the tsokolate was supposed to froth at this point but it didn’t for several possible reasons: 1) I overboiled the mix, seeing it having frothed a little earlier, 2) I used too much liquid and didn’t reduce the mixture enough, 3) It was my turn on the XBox and I didn’t spend more than a minute beating the damn thing. 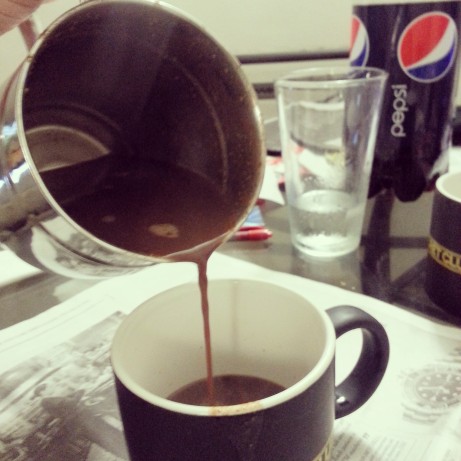 If you were expecting a glowing review about the tablea however, with some quaint story about how I grew up on it and drank it with my lolo in the early Philippine sun paired with fresh baked pan de sal, you are slightly mistaken. This was my first time tasting it and I have to say…it was a little too sweet for my liking. It was slightly grainy, though not unpleasantly so, with just the right hint of nuttiness from the Lily’s. All in all it was “meh”. And maybe that’s because I didn’t have the fond memories of growing up with it. After all, nostalgia is just as good a flavor enhancer as sugar no?  Then again, my roommate – who’s addicted to sugar (Sugar in omelettes? Really bro?) – also commented on how rich the drink was so maybe it wasn’t just me.

Maybe next time I’ll try the unsweetened variety or make a dessert out of it. I hear you can also spike the thing with some rum and an egg for a proper old-school Filipino cocktail (future experiment perhaps?).

Maybe someone else can write a more favorable review than I have. Try it out! Explore Filipino Town in Queens, buy a pack (or substitute with the Mexican variety), whisk it like you mean it, and wait for the flood of happiness (or not).  Whatever you do, stay warm people!