I’ll admit it.  I’m one of those guys who loves office potlucks.  In the age of Seamless deliveries, it’s very rare to taste home-cooked food at the office (or at least for those who take the effort of bringing something home-cooked).  It used to be that people brought casseroles or roasts to the office or made large platters for office functions.  Even worse, with 2 of our 3 meals being takeout during Busy Season, a departure from the mass produced is a welcome break.  And yes, I’ll also admit to loving the opportunity to show off a bit and attempt to feed people other than the roomies. 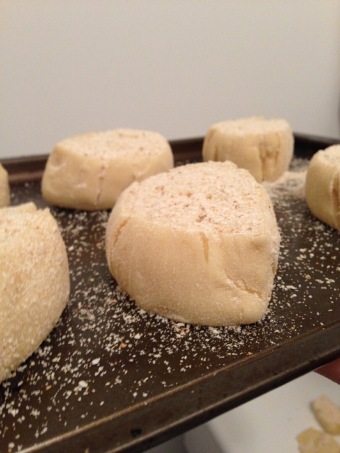 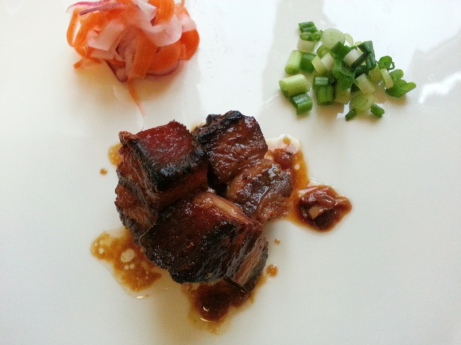 Our department just held its Annual “Best Ethnic Recipe” cookoff and I couldn’t pass up the excuse to throw down in the kitchen.  Problem was, Filipino food isn’t exactly the prettiest food out there.  Plus, how to introduce people to concepts beyond the usual Lumpia and Pansit (more Chinese than Filipino…but I digress)?  To put my own spin on “Fusion Food”, I decided to make a Pork Belly Adobo Slider topped with some home-made Achara and sandwiched in a fresh-baked Pan de Sal.  And since boxing legend Manny Pacquiao was about to fight Brandon Rios (I know we all wanna see Mayweather but again…I digress) a few days later, I dedicated this flavor powerhouse to the Pac-man.

What better way to get the powerful flavors of Pinoy cooking into the mainstream than through the popular slider?  The pork belly was braised in a soy sauce-vinegar adobo sauce and then broiled to crisp the skin.  To help cut the buttery fat, I pickled carrots and daikon radishes to make Achara, the Filipino take on the usual slaw…except sweeter. But the real kicker was the bread, the blank canvas, the foundation of this epic meal-to-be.  I wanted a fresh baked Pan de Sal, the ubiquitous Filipino roll.  Soft, simple, goddamned comforting.  Problem was…I hated baking. I just can’t bake (probably stemming from some deep-seated trust issue but that’s another story).  So I called up my friend Chelsey who happens to work some real baking magic and asked if she can bake a batch.  Not only did she agree, she insisted on baking it the morning of.  If that isn’t magic, I don’t know what is. 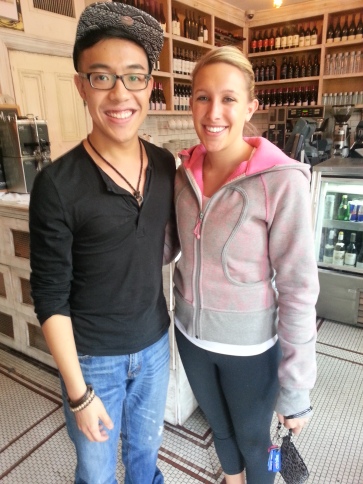 Check her recipe (and her amazing baking blog!) out here.

NOTE: this recipe has a lot of “long wait” moments from marinating the pork, pickling the Achara, to braising the filling. Plan accordingly!

Other optional garnishes:
– Chopped scallions
– Micro-greens
– A fried egg
– Hell…pretty much whatever you want 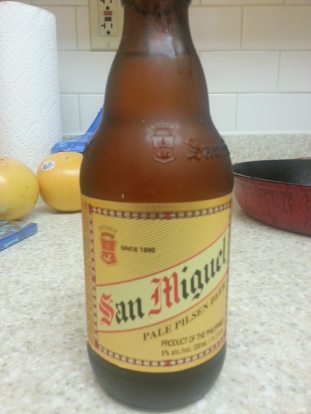 (SETUP) Marinate the pork belly in everything but the beer for a few hours or overnight. 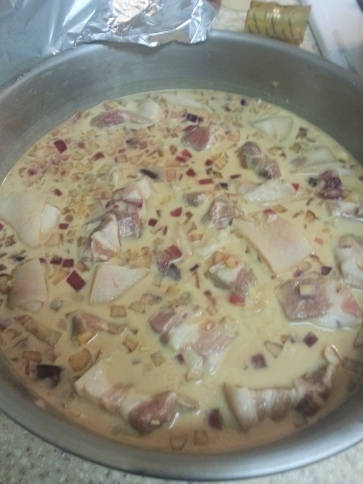 1) Heat some oil in a wide, heavy pan or wok.  Scoop a bit of the onion, garlic, ginger mix out and sautee to flavor the oil.  Save the marinade liquid.

2) Once the onions turn shiny and the whole thing smells like your lola’s house on Sunday mornings (aka fragrant), carefully place the pork in skin-side up, shaking off the excess liquid first.  Fry for a few minutes until browned then do the same for the bottom and sides. 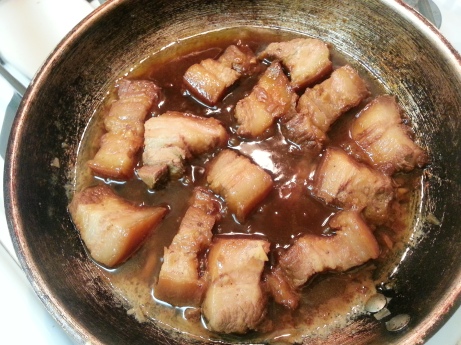 4) Lower the heat to med. low and braise covered for 1.5 hrs. minimum.  The longer you cook, the more tender your meat.  I know microwave dinners and fast food has conditioned us to want our food RIGHT NOW…but patience is key here!

(SWITCH TO THE ACHARA)

5) Mix vegetables and 1/4 c. salt well in a bowl to dehydrate.  Cover for half an hour.

6) Strain and rinse with running water.  Squeeze as much liquid out as possible by pressing into strainer or using a cheesecloth.

8) Pour pickling liquid over vegetables and refrigerate.  These will be combined with the pork later.

(SWITCH BACK TO THE PORK)

9) Once pork is tender to your liking, braise uncovered for 10 or so mins. to dry up the skin.  Alternatively, dab skin side with a paper towel after transferring the pork out of the pan in the next step.

10) Transfer the pork to a small roasting pan and place under your oven broiler (if your closet room in Midtown has one.  If not, no big deal!) and broil for a few minutes to crisp the skin.  This should only take a minute or so so make sure you don’t burn it!  The skin should blister and brown.

(ASSEMBLE) Roughly cut open the pan de sal and place the pork belly inside, drizzle with a bit of the adobo sauce, top with pickles and other garnishes.  Now pour yourself a strong drink…you’ll need it to counter the flavor assault you’re about to experience! 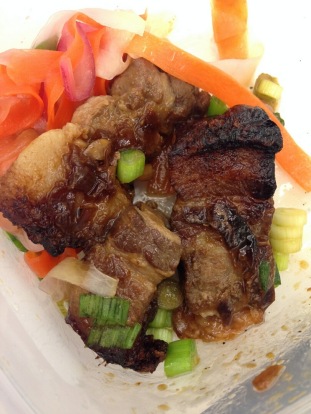 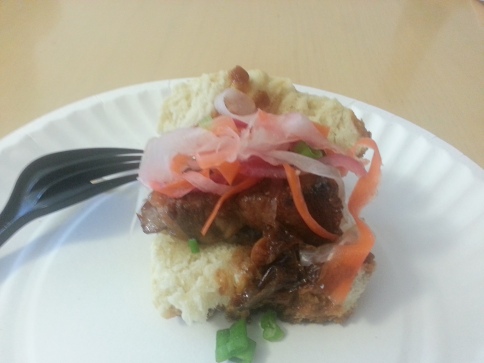 The struggles of trying to take pics on your smartphone at an event. 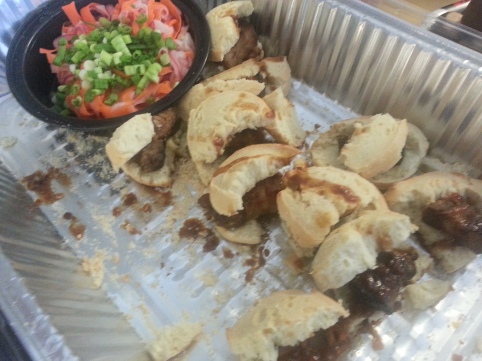 Setup for the office.