Fresh Off the Boat.  It was always the (rather inappropriate) excuse I’d use whenever I’d commit some cultural faux pas, justifying that no…I’m just a Pilipino boy from elsewhere who has NOT seen the Fresh Prince of Bel-Air (apparently that’s a crime around here).  I’d always be the outsider despite being reminded the other day that I would have spent almost a decade here in the States.  Still, I never could quite bleed the red, white, and blue and up until recently, I regarded Fourth of July celebrations with mild amusement; the day became synonymous to me as one of gluttony and excess rather than its actual revolutionary roots.

For years I also saw J4 as just an excuse to skip class, drink some cheap beer on a rooftop, and sleep in.  Unlike Thanksgiving with its iconic turkeys and cranberry sauce, J4 as an American Holiday only offered me rubbery hot dogs and charred burgers and so it was difficult for me to relate foodwise with the event.  I do believe that food, in a primal way, helps us connect with the unfamiliar and so if the holiday offerings are the same as the slop I can buy off the carts by Grand Central…was there anything unique that I could relate to with J4? 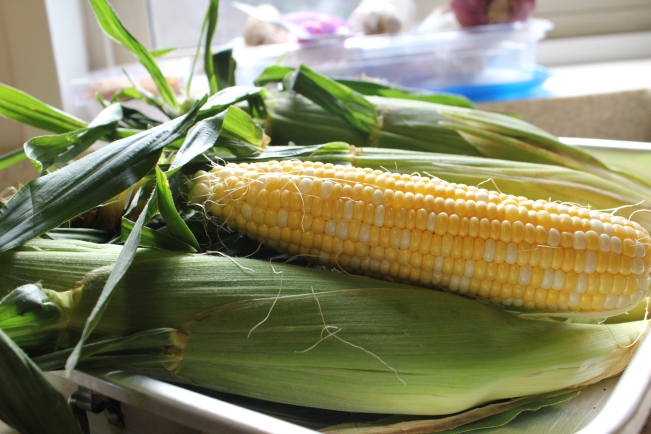 This year, we decided to host yet another throwdown at our apartment (thanks in part to the unfortunate storm outside) but with our own riffs on American classics.  French fries that were cut just a bit too thick and baked with Old Bay Seasoning; roast corn-on-the-cob that were de-cobbed (is that even a verb?) and mixed with creme fraiche, chilli powder, and citrus a la deconstructed Elotes; mac-and-cheese that used parmesan instead of government cheese and topped with beshamel sauce; and nearly toxic Phrosties, a concoction of 160 proof liquor and Kool Aid (oh come one…we had to do something trashy right?).  The piece de resistance however, was our mish-mash of a burger.

Rather than making burgers how they’re usually done: cheap, airy buns, overworked hamburger meat grilled to a crisp, limp lettuce, slice of cheese “product”, we went coast-to-coast for inspiration.  The meat was an 85:15 ground beef + turkey (I know…blasphemy) blend that we chose after a 10-minute debate whether ground brisket would be a better option, the bread a denser Challah roll.  From the West Coast was some Kimchi I had quickly put together from a head of cabbage and Korean chili powder I had bought from the H-Mart in K-Town.  The tomatoes were replaced by roasted peaches from the South.  From Hipster Brooklyn was a crisp Kale chip for added texture and reduced guilt.  And from the Midwest, with its unlimited eccentricity, was our decision to impregnate the meat with a good dose of Pepperjack cheese to replicate the iconic Minnesotan Jucy Lucy.  The result was something entirely Un-American and All-American at the same time; a melding of regional tastes and cultural influences. 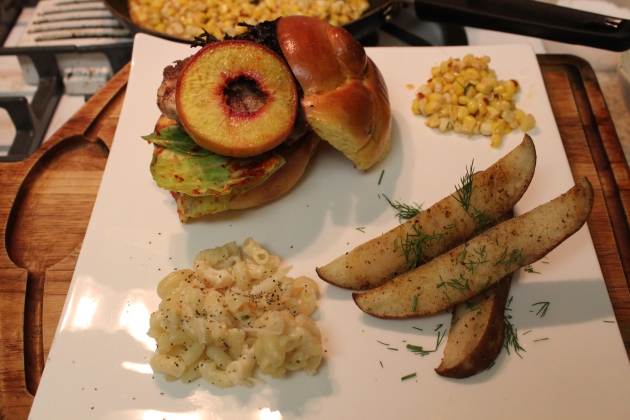 While the stereotypical, midriff-baring, overly loud, sunburnt, sunglass-wearing, teenager yelled “‘Murica!” for the umpteenth time under our window, I thought, “Well…what makes an American?”  Is it an extensive knowledge of Boy Meets World episodes?  Is it an innate craving for mac-and-cheese and obscure American snacks?  Perhaps it’s an appreciation of things like NASCAR racing and Coors Light and a convenient derision of futbol?  I meditated in between bites of the molten cheese core of this burger and concluded that perhaps, I am not the outsider.  Just as the K-Towns of America introduced kimchi and the Jewish immigrants brought over Challah bread, perhaps this burger gave me some connection to the land I’ve eaten in for the past decade.  Maybe all those jokes I put up with in high school about being un-American were really just America’s way of failing to realize that an American is everyone and no one at the same time.

Then again, maybe I’m just overthinking.  I quieted my mind, wiped by hands of burger grease, and prepared to attack the burger before me one more time.

Because any post about the American identity (especially from someone like me) always has the potential to spark some misguided debate, re-sharing this great video that went viral a few months back just so we don’t all get our undies in a bind.  Other than that, eat well friends.