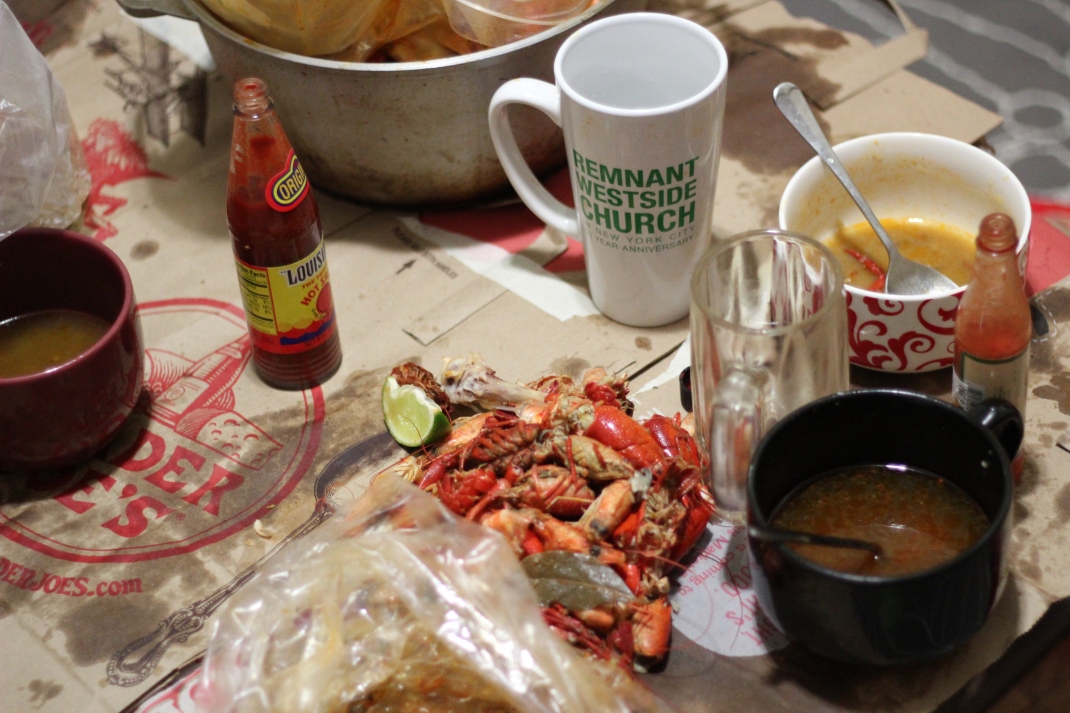 A moment of silence.  We carried a large pot filled with 5 gallon plastic bags out to the living room, each labeled with a hastily marked strip of masking tape and filled with freshly boiled shellfish, potatoes, and sausage.  People were kneeling around a low coffee table and faces went from mild curiosity to delight as people grabbed their own bags, opened them together, and let a cloud of aromatic, ‘Nawlins-steam into the modest space.  I guess holding a Crawfish Boil in a small Harlem apartment instead of the wide open outdoors had its perks as you could almost see the red-tinged aroma in the air.

One thing I’ve always struggled with is being able to pull away from the actual food cooking on the stove to the overall dining experience.  It’s so easy to get caught up on whether something’s too salty or if the food’s burning that I often forget the other aspects.  Is the music good?  Does everyone have a drink?  There are plenty of how-to books out there concerning the art of hosting and I’m sure I’ll get to them one day.

One specific aspect my friends and I explored a few weeks past was how to move past just dumping the food on a plate and treating it like every other meal out there.  There’s a certain effect that can be achieved by switching small details and forcing people to eat food in a different way.  Eating grilled fish and rice on banana leaves on the Philippine beaches for example.  Or sampling sushi with hands instead of chopsticks.  Hell, even drinking Panera’s soup out of the bread bowl changes our perception of the dish in front of us from mundane to a real experience.  There’s gotta be some proof out there that shows that the food tastes better when eaten in a way other than the usual fork and plate.

My friend Angel just had her birthday and since we’ve been talking about a Crawfish Boil for the longest time now (coincidentally just came back from New Orleans the other day), we decided we’ll try pulling it off in a tiny New York kitchen rather than the large backyard spreads down South.

I thought of just ladling them into bowls from the large stockpots we had going.  But co-kitchen ninja Ricky had the simple but clever idea of serving them in plastic bags like the restaurants do.  Drape some torn up grocery bags over the table and we had effectively changed the entire course of dinner (yes…I am in a rather melodramatic mood).  Crazy to say but something as tiny as switching the serving vessel had such an impact on the meal!  Then again, Ricky was also the one who made faux meth crystals from ground up blue homemade candy rocks for the Breaking Bad finale so the experiential aspect was definitely his forte.

Halfway through the feast.

When serving your next meal, what can YOU do to elevate the whole thing from a simple get-together to a real experience?

Extra equipment:
As many large stockpots as you can find, large basins or bowls to wash the seafood in, 5 gallon plastic bags that are sturdy enough to hold hot food.

Ingredients:
The filling:
5 lbs. crawfish (come to think about it…I’ve never seen raw crawfish at any market so we bought pre-cooked but I assume it’d be better fresh!).
1.5 lbs. shrimp, unpeeled with head on (the shells impart the most flavor so don’t get dem frozen cocktail ones!)
2 lbs. spicy sausage, chopped (we used Italian Sausage but you can use chorizo, Merguez, or any other strong-flavored sausage).
2 lbs. potatoes, roughly chopped into 3″ chunks.
4 ears white corn, halved (these provide great body to the broth too), optional

The spices:
(In any quantity you want!  Experiment with the proportions according to your taste):
Cayenne.
Bay leaves
Cajun Seasoning (we used McCormick’s but Tony Cachere’s or any similar spice mix works).
Old Bay Seasoning (these come in yellow tins and are sold at most seafood purveyors.  Heck, if Chinatown, NY has it…).
Lemon pepper
Hot sauce (to be truly authentic, find Crystal’s, a Louisiana brand.
Paprika
A whole head of garlic, peeled and smashed.
2 whole onions, roughly cut in 3″ chunks.
2 sticks of butter (calm down…this is just for the sauce.  You can cancel that triple bypass surgery you just booked).
Pack of shrimp/crawfish boil, optional. These are spice blends that are wrapped in mesh that you toss into the pot.  Opt for these if you don’t have many of the spices above.

Steps:
1) Soak the crawfish in cold water, rinse, repeat a few times discarding any debris and crawfish that are mushy.

2) Boil water on a stove and toss in the onions, garlic, corn if you’re using it, and potatoes.

3) After about 10 – 15 mins., add the sausage and shrimp/crawfish boil.  If you’re not using the boil, toss in the bay leaves and Cajun Seasoning.

4) While you’re waiting for the meat to cook, heat and melt all of the butter in a small sauce pot over medium, making sure you don’t burn it.

5) Once melted, add all the other spices and mix.  This will be your sauce.

6) Once the sausage is cooked, add the crawfish and let boil on stove for at least 10 mins. (longer if using raw crawfish).  This allows the flavors from the shells to mix with the water.  Check to make sure your potatoes can be pierced with a fork easily to ensure they’re done.

6) To serve: Ladle it all into a plastic bag with as little broth as possible, drop a few tablespoons of the sauce, shake it all up, tie it shut!

There was something about eating out of plastic bags with your hands in communal silence that made that meal something else.