In this lookback of the first #FKEDUP live collaboration in Boston this past February, Paolo Espanola and Sarahlynn Pablo reflect on the team’s brunch pop-up and participation in a regional conference for Asian-American students.

It takes a certain kind of muted masochism to pull off a pop-up: embracing the uncertainty, unfamiliarity, and heightened stress that comes with these one-off engagements that lack the full commitment of owning your own space. In our case, masochism took the form of a crew that’s never met in person, a venue smack dab in the middle of Winterfellian Boston, and a cuisine that hasn’t quite broken into the local populace’s psyche quite yet.  Now, I don’t want to make it sound like we were in the throes of despair as we peeled over 60 lobster tails during prep night…but we definitely preferred the raucous music playing on the kitchen speakers to what must have been bubbling anxiety underneath; courageous denial, so to speak.

The menu – a far cry from Filipino dishes of long ago – seemed more fitting for a sun-soaked Californian patio, not the gloomy slush that covered the streets: Longganisa Scotch Eggs? Chicken Inasal and Atsara na Mangga? No one asked whether the steady snowfall would mean we soft-boiled too many eggs. No one asked whether the unsuspecting populace would “accept” our version of Filipino food. And when a tita – the venerable judge of Filipino food – called and said she would rather eat in Chinatown where it’s cheaper since we weren’t offering some sort of “show” along with brunch service, we hardly had the time to panic. 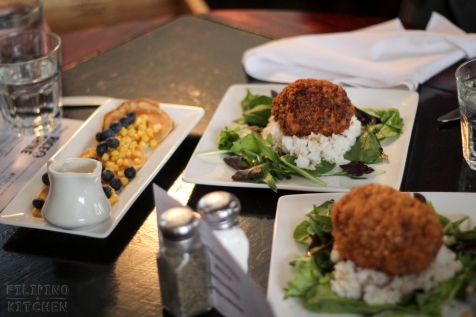 And so we waited breathlessly during those first few hours; waiting for signs that they’ll like our food.  That’s the paradox of how we were cooking Filipino food: reckless abandon by a people so concerned about what “they” will think of our food. “Baka ‘di magustuhan ng mga Kano!” [“Maybe the Americans won’t like it!”] The feeling that perhaps our cuisine isn’t good enough…not refined enough…not pretty enough to warrant a proper brunch service; food that belongs in the dimly lit turo-turos and not the airy pub-cum-brunch hall we found ourselves in. 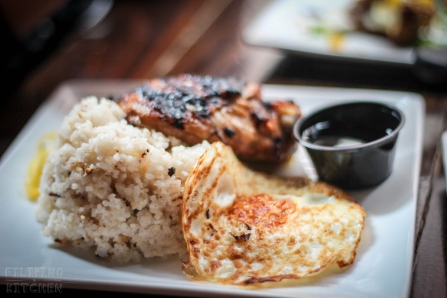 Then again, we weren’t really cooking Filipino food, were we?

It comes with cooking in a transplanted kitchen: having to justify the “Filipino-ness” of our dishes. The Maja Blanca pancakes that we served – fluffy silver dollars topped with a coco-condensada syrup, corn kernels, and berries – were a far cry from the original pudding that utilized latik (burned coconut cream), agar, and was served sans maiz.  The “Lobsilog”, a sexified sous vide lobster tail served with pickled strawberries, was only similar in construct – rice, egg, protein – to its kin, the Long-, Tap-, and Toc-ilogs (Sausage, Cured Beef, and Bacon respectively) of the Motherland. And seeing as those dishes were Spanish (and most probably, Arabic) in origin, were we being Filipino enough?

Even our crew, a mishmash of Filipino-Americans and neophytes – some of who’ve never even had Filipino food before – could hardly recite the Panatang Makabayan.  Instead of Parokya ni Edgar and intense discussions of whose regional adobo was better, dancehall pumped through the speakers as a fellow cook tasted homemade Longganisa for the first time. And yet our menu had the requisite Filipino sun ray logo, the ever-present calamansi cocktail, the overt jeepney graphic.  Could we get any more Filipino?  And yet…was it really Filipino enough? 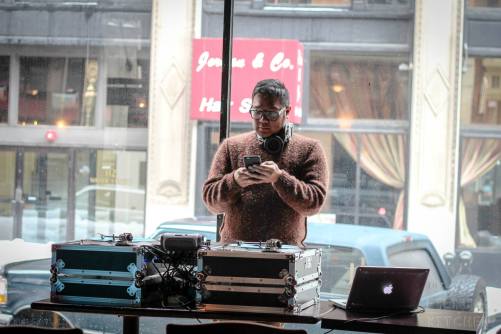 Weeks prior, as the culinary minds put forth the beginnings of the menu, it was evident that our offerings skewed gastropub-Soul rather than kalinderya.  My own contribution, “The OFW”, was a Filipino twist on the British (née Indian) Kedgeree: a melange of mushrooms on aromatic rice and a plumcot chutney; hardly recognizable as a -silog in itself.  But just like its namesake, the transplanted Filipino toiling away in foreign lands, isn’t “Filipino food” a cuisine that defies easy definition? One that makes its home in the deserts of Saudi Arabia just as well as the beaches of the West Coast?  With all this talk of Filipino Food: what it is, who gets to make it, what it should taste like…perhaps we’ve been asking the wrong question.  Better yet, perhaps there was no question to begin with.  Perhaps we cook not to draw boundaries but instead to shout and be heard.

Critics, ourselves included, will pontificate on what constitutes a proper Filipino Sinigang, yet won’t dare question the European “Spanish-ness” of Paella despite the dish’s strong Moorish influences.  Therein lies the problem: sometimes the person who’s critiquing our own food and journey the most isn’t the overly skeptical tita who wants to see a group of girls in tutus performing some Mariah Carey song while she chows on her idea of a Pinoy brunch….it’s us. When the person in the mirror is the one asking: “Are you enough?”, it gets tough; masochism born out of centuries of being told we’re only allowed certain paths in life. Perhaps, like ourselves, Filipino food “just is.”  One of my restaurateur idols went as far as to defiantly state: “I don’t give a rat’s ass what the mainstream wants to call it, I’m cooking it and calling it what I want to.” 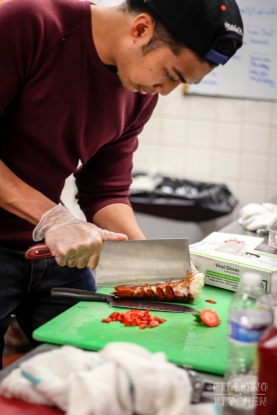 Well you know what?  We WERE cooking Filipino food, goddammit, and we shouldn’t give a rat’s ass what anyone wanted to call it!

Towards the end of the service, one of the line cooks turned dishwasher stepped out to take a smoke break.  In the space of 5 minutes, the pile of dishes in the back bred and multiplied and when he returned, he stared up at the unsightly stack of fat-drenched plates and sticky syrup. He swore loudly, threw his hands, and complained loudly to no one in particular.  And then a curious thing happened.  A smile crept over his face as Rupee’s “Tempted to Touch” began playing, he glanced over in my direction, shrugged and said, “Guess it’s gotta be done!”.  Masochism?  Perhaps not.  Perhaps like him, we too should accept our obligation — not with this knot of constant fear…of relentless whisperings of inadequacy — but with cheerful resignation. That at the end of the day, there is no such thing as getting Filipino Food “right”…it’s just gotta be done.

It takes a certain kind of courage to teach. Those of us who have had the privilege of learning from a great teacher know it’s a noble profession because teaching shares ways to higher knowledge. Teaching is tough. Teachers are expected to do their homework before everyone else and master the subject. Teaching involves a good deal of public speaking and engaging with your audience. A great teacher can motivate students to explore material they have no particular interest in. 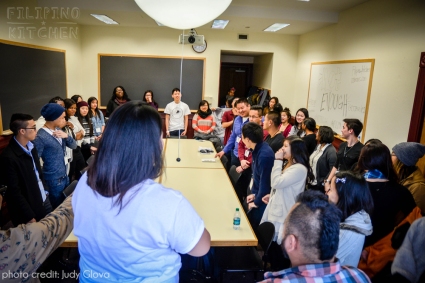 There we were: Harvard University at the East Coast Asian American Students Union (ECAASU) annual conference, facilitating a workshop with the #FKEDUP crew and old friends, Brandon Glova AKA DJ Bonics and his sister, photographer Judy Glova. Ok, so we weren’t exactly teaching, but approximating it for an hour. By sharing something of our personal journeys, we wanted to give back to the young people we saw so much of ourselves in, just fifteen years ago. Filipino Kitchen is proud to be Filipino American and Asian American, and spaces like ECAASU helped this pride take root.

Our workshop tackled identity. Not exactly light stuff. Though the conference maintains a safe space to express opinion among Asian-American peers — it’s hard to bare your twenty-year old soul to a room full of strangers. Kinda like group therapy, honestly. And I mean that fondly, and with a degree of sentimentality. ECAASU is fertile environment for young Asian Americans can think about and give names to our experiences ourselves.

We named our workshop “Not Enough”, for the phenomenon that first- and later-generation Asian-Americans’ experience: not measuring up to be asian enough for our families or Asian-born peers, nor American enough for our friends and American society at large.

Our young people spoke up and told us how they were experiencing the ‘not enough’ phenomenon themselves. College was a new proving ground, where for some, unlike diverse spaces of childhood, their identities were challenged and provoked from the outside. Multiracial Asian Americans shared pains that ran deep. Feeling ‘not enough’ was the status quo. They felt tired of justifying self, explaining self, and more so, angry at that imposed responsibility.

Before the conference we asked our friends on social media to share the ‘not Asian enough’ moments they had:

In the workshop, we questioned the questions of being “Asian enough.” We wanted to expose that there was no test for being Filipino or Chinese or Taiwanese or Laotian or Indian or Korean or any of the heritage origins with which we Asian Americans identify. There was no “Asian enough” test at all. 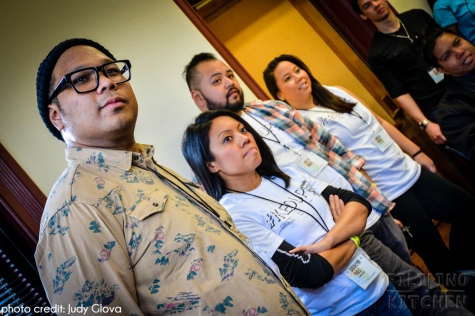 None of the students spoke of overt racism or prejudice (or wanted to volunteer that information), though we acknowledged them as part of our reality. Instead we spoke of the subtleties of ‘othering.’

The young people said that some non-Asian Americans students didn’t understand their need to create spaces for themselves on their college campuses, misinterpreting forming student groups like Filipino Students Associations as exclusionary tactics. A few spoke of the oft-muddled identities and nuances brought on by mixed nationalities and cultural birthrights.

Before the conference, our friends on social media shared their ‘not American enough’ moments, too:

The conversation about defining American (as famously coined by undocumented Filipino American activist and Pulitzer prize winning journalist, Jose Antonio Vargas, and the 40 million immigrants in this country, lawmakers, pundits, and the many others in the immigration debate) is hotly contested.

At the end of the day, who can say what identities we can claim or cannot, except for ourselves?

While that was plenty of ground to cover, we didn’t get to touch on how divisive ‘not enough’ is. How the personal offenses and attacks keep us from building community and prevent us from questioning systems like imperialism, capitalism and patriarchy. Sixty minutes is not a lot of time to dive deep into the subject, and we considered it a success that many of the workshop participants stayed afterwards to talk with us.

We ended the workshop with a shout. Paolo asked if maybe it’s just time we start being comfortable with the uncomfortable? Maybe there’s identities we can try on, even if we’re not “supposed” to? What’s a Filipina “supposed to” be? What’s an American “supposed to” be? What about someone who grew up in three distinct cultures? Where is home? Can we shout our names at the top of our lungs in a Harvard classroom? Maybe that’s when our work really started.

Thank you to our friends at The Vault Restaurant in Boston — Kate, Corey, Mallory, Liz, Val, Andrew and Vinny — for a wonderful service together. Thank you to the patrons of the RICE & SHINE Boston brunch pop-up.

And always, thank you to our entire #FKEDUP Boston crew for your hard work and incredible talents — Noel Aglubat, AC Boral, Stephanie Chrispin, Brandon and Judy Glova (especially your DJ’ing and photography, respectively), and Natalia Roxas.